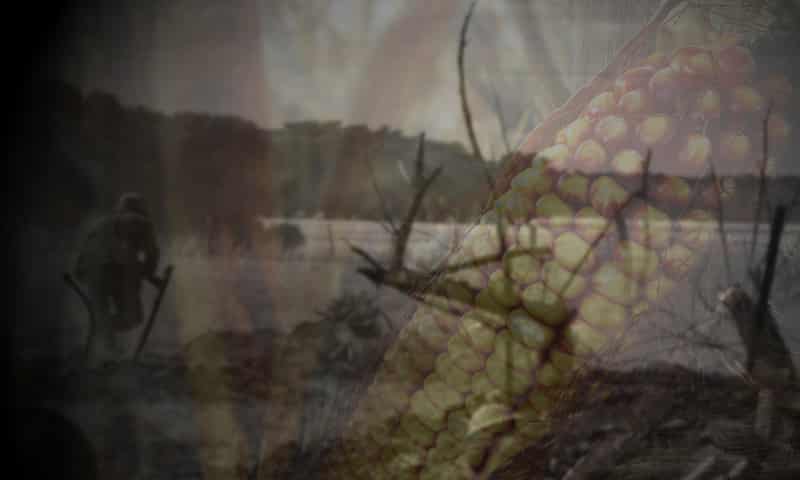 The soldier couldn’t believe his eyes as he watched the farmer sitting smack-dab in the middle of combat.  And of all things, smiling.  He sat cross-legged and calm, as fire engulfed his home, his farm, and everything he had spent his entire life building.

Just moments ago the battle on the farmer’s property had ceased.  Bodies from both sides were scattered all around and the black smoke of violence covered the sun.  As the soldier scanned his surroundings for danger, he got up from his barricade and approached the farmer.

As he got closer, he could see the ground all around the farmer was still smoldering from the crossfire that ended the battle.  There he was, sitting in the middle of the field as if nothing had ever happened.  Staring at the mountains, off in the distance, as if seeing them for the first time.

“Sir, are you hurt? Can I help you?” the soldier asked, still scanning for insurgents.

As the soldier reached for his canteen, he noticed the farmer had been mortally wounded.  There was blood flowing like a river, from just under his left shoulder blade where he had been shot.

“An unfortunate casualty of the hell of war.” the soldier thought to himself.

As he handed the canteen to the farmer, he asked why he was smiling.

“Because I won.” he said with labored breath.

“I’m not sure I understand sir?” the soldier replied, feeling sympathy for the farmer.

“Frost was over three weeks ago son.” the farmer said, as he opened his clenched fist revealing a single seed of corn.

The farmer then took the seed and placed it deep into the rich soil before him.  With his left hand, he poured the canteen of water over it, covered it up with his right, and fell to his side as his final breath left his body.