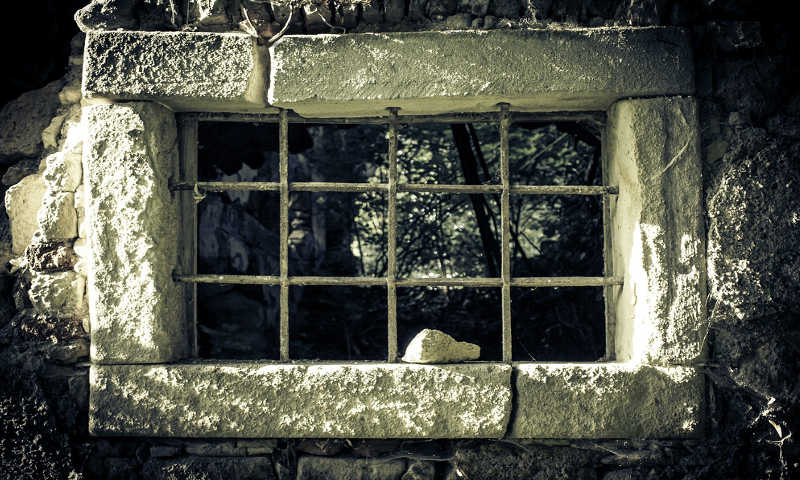 “I don’t know why I’m here.” the prisoner pleaded to the guard, as he fidgeted with a piece of paper rolled up between his index and middle fingers.

“That’s exactly why you’re here.” the guard responded with a scowl. “You’re all the same, you know that right? You go from point A, to point B, but you never make it to C. Just remember I told you so.”

Without warning, the large metal door that separated the prisoner from freedom, opened with a thunderous rasp that jolted everyone in the dark, windowless room. Without uttering a single word, the lawyer emerged from the shadows and motioned for the guard to leave her and her client be. As the guard left, the lawyer sat in front of the prisoner and opened her briefcase.

“So,” she said, as she pulled out a stack of blank papers, placing them on the cold metal table between them.

“How are we going to get you out of here?”

With bloodshot eyes, the prisoner looked up towards the dark-haired woman, set down the rolled piece of paper, then clasped his hands together upon the table.

“I don’t even know why I’m here, or where here is.” he whimpered. “You gotta help me get out of here.”

The lawyer offered a sympathetic smile because, like so many times before, she was aware that it was the prisoner himself, who had the answers. She also knew his ignorance was a cover up. Like the way a child fakes an injury in order to deter her parents from the fact that she’s scared. Eventually, you get so caught up within your own lies, you begin to see them as truth. But, if the prisoner was ever to see his reality the way she did, then he must arrive at that conclusion on his own. Not through the persuasion of others, especially the guard.

“Let me ask you this.” the lawyer said, as she pushed the stack of papers further towards the prisoner.

“Tell me what these mean to you.”

As the prisoner lifted his chained hands towards the stack, he noticed something peculiar. The papers weren’t completely blank as they appeared to be from a distance. Instead, upon each sheet were words barely visible to the naked eye. As he sifted through the stack trying to make out the text, he looked up at the lawyer puzzled.

“If you want me to tell you what’s on these papers, I can’t. The print is too light. There’s no way to understand what any of them say.”

“How about the rolled up piece of paper you were just playing with?” she said, motioning towards the prisoner’s right hand. “Can you read what that says?”

Without skipping a beat, he unrolled the paper and moved his eyes over its text. His face seemed to fall, as he looked up towards the lawyer with a trembling jaw.

“So, you know why you’re here then?” the lawyer asked.

“Yes.” the prisoner replied, letting out a big exhale. “I do.”

“And, you know who the guard is, and why you have allowed him to treat your so poorly?”

“That also means you know who I am. Correct?”

“Yes. I knew who you were the second I saw your watch.”

“What about my watch?” the lawyer asked.

“I’m wearing the same one.” replied the prisoner, lifting his left wrist to show the woman his watch.

“So then. You know where you are, why you’re here, and how to set yourself free?”

“Yes.” he affirmed, shoulders now slumped towards the floor.

“Good.” the lawyer continued. “But the real question is, do you have the courage to do this all over again?”

The prisoner took his eyes off of the woman and placed them back upon the paper resting neatly in his hands, and read the text once more.

Dear Mr. Winthrop,
We regretfully inform you that although your story has promise, we are unable to accept it at this time. We wish you the very best with your career.
Sincerely,
Abel Bishop
President, Bishop Publishing

The words made his soul bleed. With them, he could hear the guard; “just remember I told you so.” Or, was it his father’s voice he was hearing inside his head? Regardless, he knew the stack of papers within the lawyer’s briefcase needed someone to darken their ink. Someone with the courage to set free their characters, fashion the environments in which they lived and, complete their legacy so that the world could evolve into a better place.

Failure and self-loathing were no longer an option. They got nothing accomplished other than placing a cloud of uncertainty over his fragile world. Now, it was his duty, and his purpose, to once again set forth the ships of his imagination into uncharted waters.

No matter the cost.

As his awakening took hold, the prisoner’s world began to transform. The dark walls around him vanished, as light engulfed the corner studio with the humming ambiance of the familiar city just beyond its walls. The metal table he was once chained, was now a rich mahogany desk with a well used coffee cup, an LED lamp, and a picture of himself during a time he was full adventure and promise.

And finally, the briefcase that was once the resting place of a story waiting to be told, had now transformed into a laptop with two single words upon its screen. Both, proving he was about to escape his self-made prison, once again.

Just in case it’s not obvious, this story is in response for those who don’t think their writing, art, or message doesn’t matter.

I know there’s a lot more I could say here, but just know this.

I believe that it’s not about us being special.  I think it’s the opposite.  You see, when we don’t think of ourselves as special, we make different choices.  Choices based on personal gain and social praise, become choices based on empathy and altruism, all of which, can be pointed into the direction of a common goal.

Although this story has parts of me in it (as they all do), it’s more about connecting with those wanting to hear a voice other than the one they believe has no pitch.

Trust me when I say this, all of our voices are heard whether or not we say a single word.  Every motion, thought, choice, it’s all recorded.

The question, just like the one in the story, is do we have the courage to allow ourselves to become aware of this perspective?

And if so, what comes next?