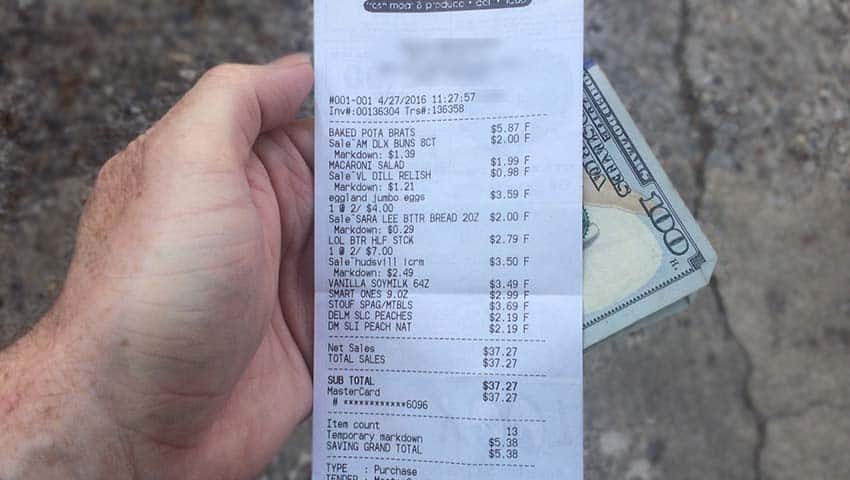 What happened to me today, (April 27th, 2016) is one of those stories that will stay with you for the rest of your life.

Okay, a little background before I share with you what led up to today’s events.

Several days ago I found myself needing to get out of the studio. It was an unusually difficult day and I was frustrated, tired, and had some shopping that needed to be done.

This was my chance to get out of the house, take a break, and get my head straight.

So, I went to the grocery store (about a 15 minute drive from my house) and grabbed a few essentials which, included filling my six empty one gallon jugs of water.

After shopping for about 20 minutes, I decided it was time to check out and head home.

My head was still spinning from too much work, and the long lines weren’t making me feel any better.

It literally took me longer to wait in line than it did to gather my groceries.

This didn’t help what was coming next.

After the cashier finally rang me up, that’s when I realized I had forgotten my wallet.

The feeling of disappointment was almost unbearable.

All I could think of in that moment was just ….why?

In frustration, I decided the hell with it. I’d put the groceries back, and push the water jugs (which you can’t return after filling) off to the side, walk out of the store, and not bother to return.

As I walked to the parking lot feeling utterly defeated, I realized I had about two dollars in change for the car wash, sitting the middle console in one of the cup holders.

I grabbed it, then went back into the store, and purchased the only thing I could afford.

I remember driving home thinking “I’m just going to bed after this.”

As you know, last night was the final presentation for Oracle.  In short, a LOT of people have signed up and have taken the leap.

Needless to say, I woke up in a great mood and have been really enjoying the day preparing for our first gathering Saturday.

After a good breakfast and great coffee with my wife, (I did try it with Stevia this morning and it was amazing FYI.) I felt I needed some time out of the studio, so I once again, took a trip to the store.

This time I made sure I had my wallet.  Once at the store, I purchased some bratwursts, macaroni salad and some buns.

(I actually wanted something that just tasted good, kind of as a celebration for getting through all three Oracle presentations. Don’t judge me. 🙂

As I’m standing in the checkout line admiring the sun coming through the front windows, an older man walked up and stood in line behind me.

He then gave me a smile as he put the grocery separator between our groceries.

I smiled back with a genuine smile.

In that moment, I remembered everything I had said the night before during the final Oracle webinar.

How I talked about moving into the Second Self, being graceful and aware of the energies of those around us, and even finding rewards come your way without a single explanation of why.

Regardless, I was in a great mood and my smile back at this man proved it.

So, it was finally my turn to be checked out.

As the cashier rang up my groceries, I could see the older man in the corner of my eye, patting his back pockets for his wallet.

That’s when he said it.

“Oh dear, I forgot my billfold.” He said, with the same this sucks look on his face that I had just a few days prior.

I immediately smiled and said, “I know exactly how you feel, this same thing happened to me just a few days ago.”

As I said it, in my mind, ran a deep sense of sympathy for him.

It was two fold.

Nothing is worse than losing your memory.  (It happens to me all the time when I get overworked.)

I just wanted him to feel okay about his mistake, and to know that he wasn’t alone.

That’s when I removed the grocery divider, and pushed his groceries into the same pile as mine.

Instantly he gave me resistance.

“You can’t do that, I can just go home and get my billfold, it’s not a problem.” He replied.

“No, sincerely, I got this.  You don’t have many groceries and I know how much it sucks to forget your wallet.”

He gave me more resistance by shaking his head and telling me no.

That’s when I looked at him and said what I’ve been telling my Tessera members for years.

“The greatest gift isn’t to give, it’s to receive. Because if you can’t receive, you’re not allowing others to feel good by giving.”

He shook his head, smiled, and surrendered to my logic.

I could feel everyone around us smiling, as he asked for my name and address with the intention of paying me back.

I said; “My name is Adam King, but you’re not paying me back.  Just think of the story we’ll be able to tell our friends, that’s enough for me.”

“I earned a lot of money yesterday and this is my way of sharing that gift.”

At this point, I could feel everyone watching us and smiling.  But for me, the only two people on the planet in that moment, was this man and myself.

The cashier finished ringing everything up, then told me the price.

I then swiped my card, and paid for both our groceries.

Finally, we separated the groceries into two bags, and I began to walk away as he thanked me again.

That’s when he shouted “Wait!”

As I looked back, he had his wallet in his hand.

He insisted that I take it, then literally threw my own words back upon me.

It was such a strange experience to have my own teachings turned around like that.  I mean, I HAD to take it, simply because I just got done explaining why receiving is the ultimate gift.

This was his chance to have that gift by giving back to someone who just gave it to him.

So, I asked him his name, took the money, and laughed as it was the only emotion I could find in that moment.

Everyone around us couldn’t believe what had just happened.

As I was pulling out of the parking lot, I saw him walking towards his car.

I thanked him one last time, and he simply smiled in gratitude.

His car was a brand new Lexus.

This is a 100% true story.  And, the real kicker (Not to mention that I just talked about rewards last night then this happened.) was that my daughter Olivia and I, had a deal that she just completed.

The deal was that if she got good grades in school, I’d buy her a Nintendo DS.

Guess how much they cost?

I cannot wait to see what else our work in Oracle sends our way.
Adam
PS Although I know bratwursts are horrible for you, they were a meal I’ll never forget. 🙂
PPS I did a little research on the older man’s name when I got home, and found only one person within 10 miles of that store matching his description.  And yes, that person (most likely him) lost his wife just over a year ago. And get this, TODAY is her birthday!  I’ll be contacting him soon with a thank you card and quite possibly some music.