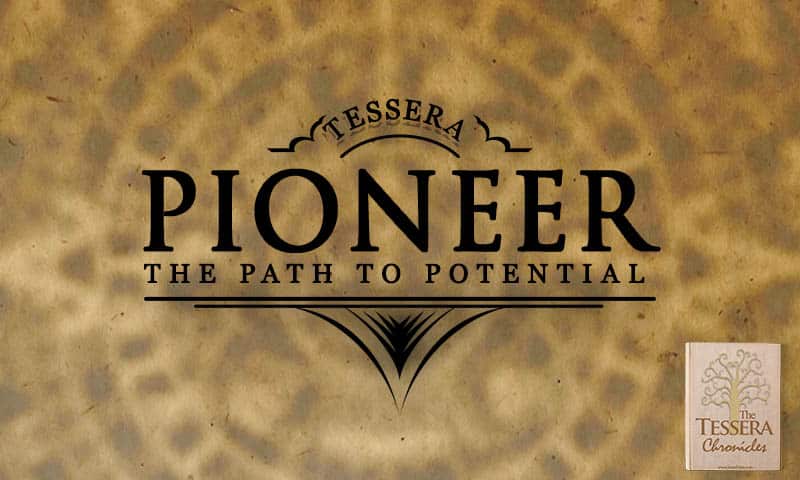 (The following is a new fictional chronicle series based on the work and experiences of Tessera. Please read the reflection below for more details.)

THREE WEEKS AGO I began to experience my own Tessera.

I would just listen to any audio, or module, for about ten or fifteen minutes, then shut it off.

I don’t know what I thought I should expect, but I began to doubt the whole process.

The instructions, well, there really aren’t any that make any logical sense.

The purpose behind Tessera is to build it. (So they say)

And, since it’s non-physical, that’s a hard pill to swallow when it comes to explaining it.

Yes, I felt better, lighter, but that’s not transformation in my book.

I expected something more than this, so I moved on.

A week ago I had this strange and profound experience.

I was at the grocery store watching (of all things) the seafood guy cut up a salmon steak for a woman who appeared to be in her low to mid thirties.

As I looked at her, I all the sudden felt this strange kind of energy, like the “me here” wasn’t quite present.

It was as if I was looking at her with a different pair of eyes.

First, I noticed what she was wearing in great detail.

She had high cheek bones, light blue eyes, and dark brown wavy hair, that fell just a few inches below her shoulders.

She was thin, about five foot seven, maybe a hundred and ten/hundred and fifteen pounds with an athletic build.

Finally, the wedding band on her ring finger told me she was married.

I wasn’t looking at her because I was attracted to her. (Yes, she was very pretty)

Instead, I was looking at because somehow, somewhere, my perspective had changed.

Within that few seconds while watching her reach for the packaged salmon steak, I had her figured out.

I think the FBI calls this profiling, but it was much deeper than that.

For me, it was a peaceful experience.  It wasn’t confusing, nor deliberate.

But what I could tell was this:

At first these predictions came out of nowhere, and I had no idea why I was making them.

It was like a light bulb just flicked on and I could see everything.

Within a few seconds after these ideas or, visions, entered into my mind, I witnessed my predictions come to life.

Here’s my point behind all of this.

It was because of the Tessera experiences, I was beginning to see things differently.

I remember this because, well, that was the whole purpose of Tessera.  Not just to build it, but to experience within it, as if you’re in two places at once.

What this produced for me was a massive state of clarity and the incredible excitement to dig deeper and learn to see even more.

As we were leaving the grocery store, a huge smile jumped across my face as my final assumption was proven accurate.

The couple was parked by me, so as I walked towards my car, I watched the couple put their little girl into the backseat of their car (together), then kissed as they shut the door.

I will continue my chronicles as my experiences with Tessera continue to grow and evolve.

This is the beginning of something very special.  Two years ago I began the process of creating a character that could experience Tessera, (We’ll call him M.) then move through its lessons as if he were the first person on this planet to experience Tessera’s vision.

This means that chronicles like the one written above, will continue from here on out.

Furthermore, you will have the opportunity to be included in much deeper reflections based on these entries via webinars, lectures, and gatherings.

Simply stay tuned by watching your inbox for more.