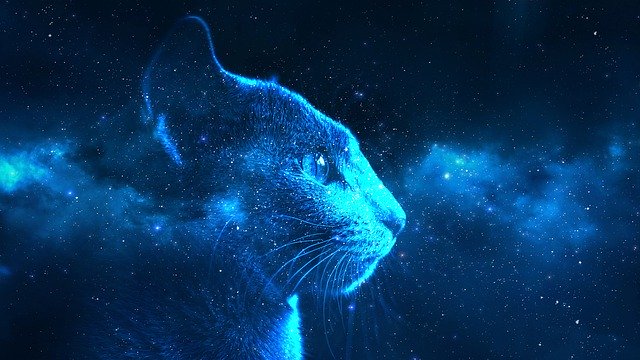 Sometimes an experience can change everything about the way you look at life.  This one did for me two nights ago.

Two nights ago I had a dream about my cat Abby.  As most of you know, she passed away a few years ago.  However, I did something while she was alive that had a huge impact on my relationship with her. (I’m sure I’ve talked about this before.)
One day in the kitchen as I was holding her, I locked in the moment eternally.  In short, I held her and paid attention to everything in that moment as if were to last forever (I’ve no learned how to simulated this by the way): the sounds in the kitchen, her fur as I stroked it, her breathing as her lungs took in and let out air, the sound of the furnace as it warmed the house, the feeling of the air from the dry winter, the echoes of her purring, the wind and cars passing by outside, all of it.
I believe because of this single moment — that lasted no more than twenty or thirty seconds — I have been able to not only dream about Abby, but fully wake up in my dreams and see her again — which has happened more than two or three dozen times so far.  And, it’s because of those conscious experiences, that we now have a new relationship.
And yes, I’ve seen people who have passed too, but none have come close to the number of experiences with Abby.
Now, you either know what I’m talking about, or you don’t.  To wake up in a dream, isn’t just having a lucid dream, it’s literally waking up, which I call a conscious dream. (out of body is the next phase) It’s when you KNOW you’re asleep, then there’s a huge shift in consciousness as of your senses kick in; like when you wake up in the physical.  You’ll hear an instant change in the environment, your senses will pick up on everything as though you just stepped into a waking reality.
The result is being able to be FULLY AND CONSCIOUSLY AWAKE within that environment/dream.  And, if there’s something, or someone, from the physical world who has passed, you will be able to be with/experience them 110%.  I’m talking everything from the way you feel their energy, to being able to count the hairs on their head, or see the very fibers in the corneas of their eyes.
Every, single, detail, 110%. (I say 110% vs 100% because when you’re fully conscious in a dream, there’s no underlying narrative like in waking life. Hence, the extra 10%)
The experience/s have turned me from atheist to consciousness practitioner, which you’ve seen me prove over the past decade.
Again, you either know what I’m talking about (because you experienced it and have come to an irrefutable conclusion of it), or you don’t.
Anyway, two nights ago I dreamt of Abby.  Now, when I say dreamt, I mean it was just a dream with all the weirdness of brain-fog, and not knowing you’re dreaming.
During the dream Abby was in front of a television in a room I’ve never been in.  She was watching the colors dance across the screen, then turned to look at me. That’s when a feeling of absolute dread came over me.

“I can’t lose you, I don’t want you to die.” I said, as my heart began to race imagining her getting run over by a car, or going missing.

I can only imagine that if you saw my unconscious body lying in the bed, I must have been showing signs of physical agitation or distress.  At least, that’s how if felt during the dream.
Regardless, a shift took place and something miraculous happened.
(This is where you pay the utmost attention, especially if you’ve ever lost a pet, or a loved one, which I’m sure you have.)
For a split second towards the end, I became fully conscious.  I don’t know if it was the distress I had felt in the prior moment, or the fact that I realized she had already passed.   But towards the end, I realized she was already gone and, that’s when I knew the relationship could never die.
What I’m saying, is that when you lose someone in the physical world (like I did with Abby), there’s times where you see them in a dream, but then wake up in shambles because the reality of them being gone hits you like a brick.
However, this was the OPPOSITE of that.  In the dream I was devastated that I’d never see her again because I didn’t realize I was dreaming, and didn’t want her to die.  But then, I woke up to realize that was impossible, as our relationship has now turned into a purely etheric one.  In short, I woke up RELIEVED that she had passed!!! This was, by far, the greatest reversal of emotions I have ever experienced.  And guess what, I can only pinpoint one reason this experience came to me now.
Simugenics.
Over the past month I have been working on systems that show us things (for the sake of simplicity), called outcome modules.  These are bundles of emotions based on our memory shell (narrative/ego), that links to things within our environment — both physical and non-physical —  as well as outward desires. Because of the realization of these modules (specifically outlined in the Mnemonic Emulation MAS experience), I’m beginning to see connections in ways I never thought of before.  Hence, witnessing the fear of death become shifted/removed, especially after a relationship is redefined (similar to the Silhouette via the Vista Effect) like the one I now have with my deceased cat Abby.

I can only imagine you’re reading this and wondering what the hell I’m talking about.
Just know this, if you’ve ever felt the walls caving in from an emotion forcing you to lose control, become misguided, or simply losing faith in your thoughts and/or abilities,  just know there are linear connections (which I call Ascendant Threads) that can show you alternative perspectives to even the most complex of emotions.
For me this isn’t just an awakening, but an incredible release from disjointed thoughts, emotions, and feelings that don’t serve me.
I hope this experience I’ve shared has truly reached you.  So many times have I just blindly answered the hard questions out of confabulation and assumption, only to realize later, that there’s more powerful resolve in the positive experiences we don’t see coming.
Warmly,
Adam
PS On Twitter yesterday there was a post with an image of a cat (below). Above the image it reads; “If you are alive you can die, so if you are immortal you aren’t alive.” Thought that was pretty cool and relative to this story. 😉